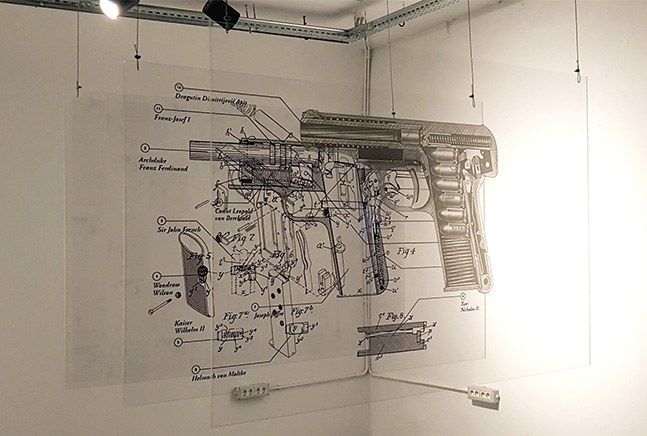 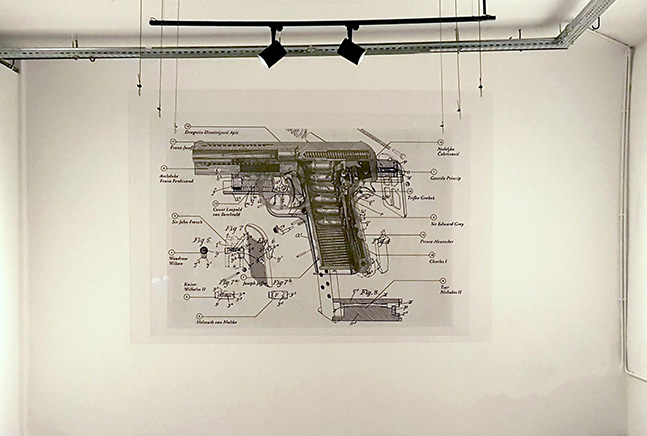 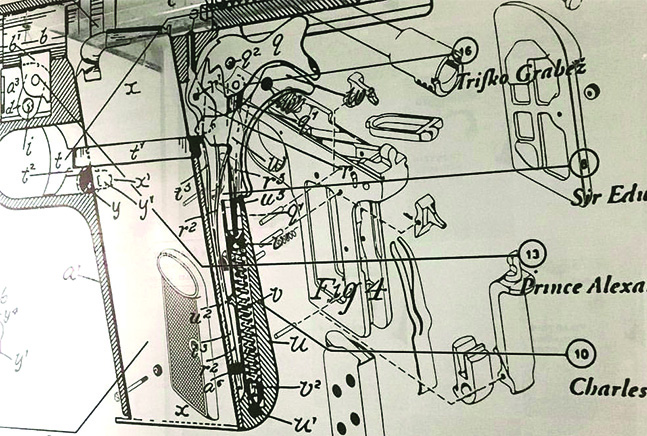 The artwork FN M1910 is reversing the position of an "object" into the historical "subject" in order to investigate how arms production and military industry create their own historical narratives. Behind this work is a story of the most controversial Yugoslav (anti)hero Garvrilo Princip who assassinated of Archduke Franz Ferdinand in Sarajevo 28.6. 1914. This event triggered the beginning of WW1, the end of Austro-Hungarian Empire the birth of the first Yugoslavia, but also its end. Over time, Princip became a hero, terrorist, traitor, villain and much more – a symptom of war. The pathway of the gun from the point of its production to the Princip’s hands epitomise the political situation in Europe of that time but also of the contemporary one which produces more than ever both: a global market of weapons and a situation of permanent war.

The pistol FN Model 1910 is the semi-automatic pistol designed by John Moses Browning, an American firearms designer. It was first time produced in 1910 by Fabrique Nationale (FN), firearms manufacturer located in Herstal, Belgium. The work maps the use of the FN M1910 handgun and demonstrates how and where it influenced historical events. This kind of weapon remains useable long after production and initial sale, so proliferation is uncontrollable. The assassination of Archduke Franz Ferdinand is one of many historic events where the FN M1910 was used.

On 28th of June 1914 in Sarajevo, handgun Browning (FN) M1910, caliber .380 ACP (9 mm Kurz) serial number 19074 has been used by Gavrilo Princip to assassinate Archduke Franz Ferdinand of Austria. On 06th of May 1932 in Paris, Paul Doumer the President of France was assassinated with a Model 1910 by Paul Gorguloff.

Between the two World Wars, the FN 1910 became very popular across Europe as a police, military and self-defence gun. FN Model 1910 was manufactured in large quantities until 1983.

In customary observations and analysis of the political climate of the First Half of the 20th Century, which culminated with the assassination of Archduke Ferdinand and the beginning of the WWI, the main object, a handgun and its manufacturer were left aside. The pistol and its production, unlike protagonists of the assassination, does not sustain historical scrutiny, is not subject to analysis and criticism, and, even after these events, it continues to be developed and promoted to become more effective in new killings and warfares.

The work is produced as a technical drawing, a map, showing the political protagonists of the WWI as the pistol mechanism. They are presented in front of a set of instructions for the use of handguns. The advertising aesthetic of the manual contrasts with the use of the product it describes.